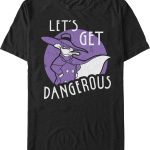 This Darkwing Duck t-shirt shows the popular crime fighter in a purple spotlight. The shirt reads Let’s Get Dangerous.

Drake Mallard appears to be an average citizen in St. Canard, but when night falls, he becomes Darkwing Duck. As a dangerous crime fighter, Darkwing Duck battles villains like Negaduck, Megavolt, Dr. Reginald Bushroot, The Liquidator, Quackerjack, Steelbeak, and Tuskernini.

For any fan of the terror that flaps in the night, this Let’s Get Dangerous Darkwing Duck T-Shirt is a must have!